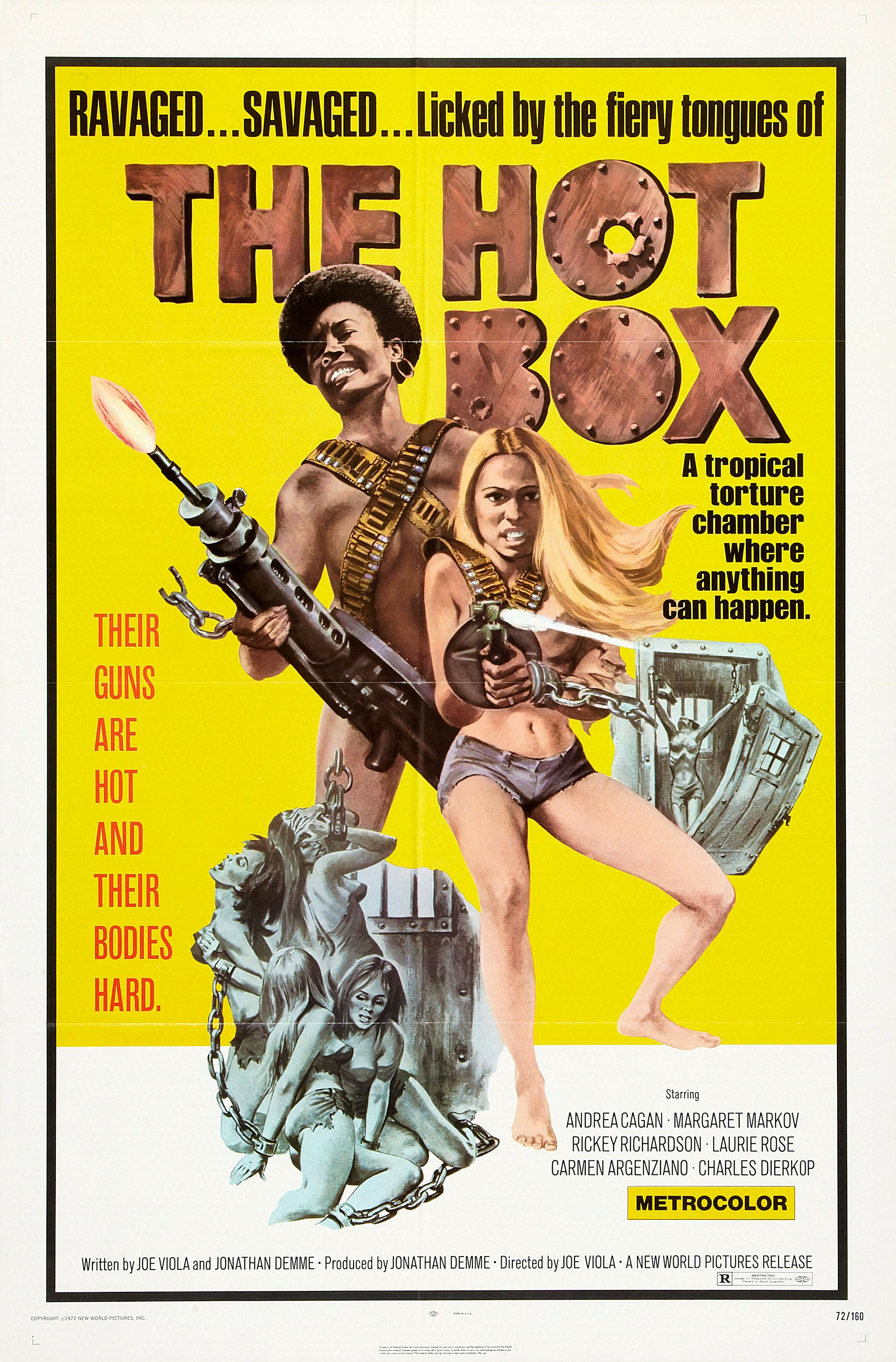 Hot action and lust in the steamy tropical jungle, as heroines break out of a women's prison and start a local revolution.

tags: Their guns are hot and their bodies are hard!

The gals spend like one minute in the "hot box". Some third world rebels kipnap 4 American nurses to help their revolution. At first they protest but later they "wake up" and start diggin' the rebels' political aim. Jonathan Demme, who scripted this, has made some fun Women-In-Prison flicks for Roger Corman like "Caged Heat" and "Black Mama, White Mama" but this halfbaked "Exploitation With A Cause" is pretty boring despite massive doses of nudity and decent acting.

People who saw this at a drive-in in the early 70's must've been a bit confused. In the jungles of South America. Lynn, Bunny, Ellie and Sue are American nurses working at a hospital clinic in the Latin-American republic of San Rosario. They are kidnapped by some bandits, who were hired by Flavio the leader of 'Peoples Army' to bring back to them. Were they would help their poorly treated civilians back to health and teach them of important medical practices. The girls are forced into it, despite attempts of escaping. Lynn after a while sees their reasoning, but the others just want to escape and they do. However they come to be captured by a brutal Army officer who abuses them, but they manage to flee back to Flavio.

Executive producer Roger Corman is at it again, with another mildly entertaining low-budget trashy exploitation fare made in the Banana Republic with some beautiful actresses to burn up the screen. The tone has a minor comic book feel to it, but the mechanical plot (co-scripted / produced by "Silence of the Lambs" director Jonathan Demme. Who he would also go onto pen the Corman films "Caged Heat" and "Black Mamma, White Mamma) is politically hounded with manipulative propaganda and heavy on the moral card. It's straining for depth and meaning as it tries to over-explain points in the surprisingly capable script, which in spurts it manages to capture some meaty moments and the few token unpleasant details (rape, beatings, torture, groping and violence) never takes over the show. It actually quite grounded in its low-brow elements, which might disappoint people looking for something sleazy. However plenty of nude topless scenes involving Margaret Markov, Andrea Cagan, Ricky Richardson and Laurie Rose make there way in. The acting from the sultry four, comes off as too strong and dramatised, but this vibrant quality gives the film some edge and personality. Markov ( The Arena, "Black Mama, White Mama") gives it a sensitive touch, Cagan playfully turns it up, Richardson goes at it in a collect manner and Rose (The Woman Hunt, The Abductors) keeps it wilful. Carmen Argenziano (Grave of the Vampire, Caged Heat, Crazy Mama) potently dons the role as Flavio and Charles Dierkop snarls it up perfectly as the brute of a Army officer. Workmanlike direction by Joe Viola is solid, without going out big. He churns out one effective surprise. It can meander and certain scenes are awkwardly forced, but it packs enough heat when it counts. Like two drawn-out, crackerjack combat onslaughts involving everyone going gung-ho with bullets, arrows and explosions. Gotta love the over-use of the sound when people die. It becomes funny, as you constantly listen to their painful expressions when they croak it. Leering camera-work gets up close, by suffocating you with the muggy air of the vividly exotic locations. The spotty music score gets into the right groove and flavour of the setting. Let those beating jungle drums go! A waring though, this is a cheap revolutionary action story than say a Women-In-Prison yarn.

Somehow it manages to feel fresh with its familiar ingredients, mainly due to the fact it's not just another WIP film and it wants to tell an actual story with a purpose than just to exploit. Entertaining low-end kitsch that's evidently more competent than most of its field.